2 Sister Food Group has made sure that as well as helping to feed the nation, it has also delivered much needed cheer to thousands of NHS staff and charitable organisations during the coronavirus pandemic.

Businesses from across its wider Group have ensured that NHS Trusts up and down the country, as well as food banks and other charitable groups, have been supplied with food during the national crisis.

Hundreds of colleagues – in receipt of ‘thank you’ packages from the business – have also selflessly decided to donate their goods to local deserving causes.

Some of the support includes:

At our UK Poultry division

At our Meal Solutions division

At our Hollands Pies factory

At our Gunstones Bakery in Dronfield 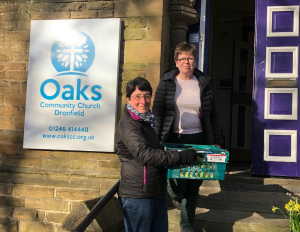 From left Sally Holt, Commercial Executive at Gunstones Bakery and

Ronald Kers, 2 Sisters Food Group CEO, said: “We’re proud to play a big role in helping to feed the nation during this time of crisis. But as a large food business making different products at many locations across the UK, we are also delighted to be able to put a smile on people’s faces during such difficult times.

“It is simply amazing that our local teams have decided to give something back to the communities in which they work.

“Whether it’s Fox’s Biscuits for many NHS Trusts or care homes, or a local food bank or other charity organisations, it’s really humbling to see our colleagues rallying in such challenging times to say a simple ‘thank you’ to those that need it most.”